Visit Bordeaux to see where the wines come from

It’s also the “noble rot” responsible for creating some of the region’s sweeter wines, which are being paired more frequently with main courses alongside their better-known Bordeaux counterparts.

Some people use the term Bordeaux generically, the way others might ask for a Cabernet, but Bordeaux wines actually come in several distinct varieties, such as sweet white wines and dry white wines, in addition to several different types of red wine. The Bordeaux region has multiple microclimates, fueled by rivers that wrap around the area in the southwest of France. And from these microclimates and variations in terroir (the vineyard soil and other growing conditions), winemakers are coaxing wines that are smooth and lush, rich and complex, with one eye on past traditions and one on the future.

The diversity of Bordeaux wines can be explored in person, in places like Saint-Emilion, about an hour’s drive from the city of Bordeaux. One of the main red wine areas of Bordeaux, Saint-Emilion’s wineries employ similar growing, harvesting and winemaking techniques, though its silky red wines are a stark contrast to those of its nearby neighbors.
Getting to Bordeaux is an easy one-hour flight from Paris, or a little over three hours on a high-speed (TGV) train. Arriving at the Bordeaux airport, travelers immediately will recognize the importance of wine to the region: Giant faux wine bottles sit atop the baggage claim carousels, and a vineyard grows right outside the terminal doors.

Unlike visits to wine regions in the U.S., though, most visits to vineyards and wineries should be arranged in advance, and appointments generally are required, as most wineries do not have public visiting hours for “drop-ins” or tasting. To get to the heart of the wine-growing region, it’s best to rent a car, but since many wineries are hard to find on the rural, windy roads, be sure to have a set of good directions (a GPS in the car also is advised).

It’s possible to make the city of Bordeaux a base for a visit, as it has several larger hotels. From there, many of the top wine destinations will be an hour or 90 minutes by car. Most of the smaller, picturesque towns have a handful of small hotels and B&Bs. Book lodging ahead of time, especially during the peak summer months. Late spring, summer and fall are the best months to visit; winters can be cold. Long summer days also offer more daylight during which to take in the picturesque vineyards and towns.

The town of Saint-Emilion, named for an eighth-century Benedictine monk, is nestled high on a hill, with nearly 200 acres of catacombs beneath the surface. They are still accessible in some parts of town, including at the winery Chateau Canon, where centuries-old candlemarks from workers excavating the limestone are still visible on the walls and low ceilings.

In spite of their cellar-like appearance, however, the catacombs are not generally used for storing wine because of high humidity. At Chateau Canon, some “old-school” winemaking practices are employed, such as the use of wood fermentation tanks, but they are coupled with modern technology and methods.

The Chateau Coutet vineyard, one of the oldest Sauternes producers in the Sauternes-Barsac region, is best known for its eponymous Premier Cru (first growth wine), as well as its prestigious Cuvee Madame. The winery’s location between the Garonne and Ciron rivers provides the perfect blend of moist and dry climate conditions that produce a grape fungus called botrytis, which causes the “noble rot” necessary to produce the sweet wines.

Lately, Chateau Coutet (which Thomas Jefferson proclaimed the best of Barsac Sauternes back in the late 1700s) and other lush, amber wines are re-emerging not just for an aperitif or after-dinner drink, but also as wine that can be paired with main courses such as spicy curries, lobster and duck. However, this newfound popularity doesn’t mean that the old-school way of doing things has been abandoned in southern Bordeaux: Many wineries painstakingly harvest grapes by hand, hectare by hectare, keeping each plot separate not only through the picking, but through maceration, fermentation and barreling. In fact, when wines are blended, it usually is the first “meeting” of the various plots within a vineyard.
In the Margaux region of Bordeaux, the Chateau du Tertre vineyard has taken a decidedly modern turn. Its minimalist decor inside gives it a clean, 21st-century feel, and its fermentation area is punctuated by an intriguing, egg-shaped concrete vat. Its 35-year-old Cabernet Sauvignon, Merlot and Cabernet Franc vines, along with some Petit Verdot, produce wines are deep yet sharp.

The average age of the vines at Chateau Haut-Bailly in the Pessac-Leognan region is also 35 years, but its vineyard includes four hectares of vines that are more than 100 years old. Old meets new outside of the vineyards, too, where fossilized rock marks the outside of the winery and modern sculptures grace the winery entrance.

Similar modern sculptures also can be seen at nearby Chateau Smith Haut Lafitte, where a giant hare watches over Cabernet Franc vines. But whether one is seeking art or nature, modern or traditional, sweet wine or deep reds, the region of Bordeaux offers diverse and widespread appeal.

“Bordeaux is … a beautiful region, and city with a full and rich history. Everywhere you look, you have a reminder that wine is deeply ingrained in the local culture,” said Aline Baly, third generation owner of Chateau Coutet. “In the city, one discovers numerous cavistes, wine bars and restaurants with fabulous Bordeaux wine lists. But adventuring down the cobblestones streets, through the architecture, museums and its beautiful parks, reminds us that wine is only one thread in Bordeaux’s rich tapestry.”
___
If You Go…
BORDEAUX: http://www.bordeaux-tourisme.com offers information on accommodations, tours and restaurants. From Paris, Bordeaux is a one-hour flight from Paris, or three hours on the high-speed train (TGV). Visits to vineyards and wineries should be arranged in advance. For information on Bordeaux’s World Heritage sites and historic monuments, visit http://bit.ly/bJvlfG.

In honour of the Rugby World Cup 2007, we’re doing a blow-out itinerary that will last 75 days, and not sure if we’ll kill each other or enjoy it thoroughly. We will be travelling from September 1 to November 15, 2007 and visiting 13 countries and countless cities along the way. Pray to god we’re not divorced by the end of our travels!


Life’s short – what would it be without adventures?

Yep! That constitutes a lot of travel over the next 75 days starting in Halifax Nova Scotia, Canada.
This trip started with me ‘mis-placing’ my passport before boarding the Iceland Air flight from Halifax to Paris. Nice start to a 75-day International trip!!

Iceland Air was a great way to quickly get to Paris. The service was efficient and courteous with a quick stop in Iceland for customs formalities and then onwards to Paris.

Arrival in Paris:
I`ve heard people comment that New Orleans was fashioned after Paris, and in the furthest stretch of my mind, I could see where they could come up with that similarity.

However – Paris is SO MUCH more, and we only had opportunity to visit the highlights of the city in our short stay. Beautiful old buildings, winding (and sometimes crazy to maneuvre) streets, much wrought iron and on every corner, something historical and/or fantastic to see. We`ll have to come back (there’s still Versailles, Montmartre, and so much more…) our time is short here, and there is wayyyy too much to see in just a few days.


Our hotel, Hotel Eiffel Seine on Rue Grenelle is in an excellent location for walking to the Eiffel Tower (maybe just 10 minutes walk) and also located close to a Paris city Hop-on Hop-off bus stop. Hotel itself is quite nice, and reception was wonderful on arrival (didn`t force me to speak TOO much francaise, Mon Dieu! (Fatigue, International flights and functioning 2nd language don’t always go hand in hand). 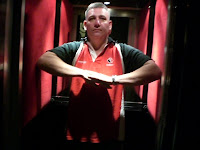 At this hotel, they make the absolute most of ‘available space’, and the lift is quite tiny (see above) 🙂 Interior decorating/design to hide or dramatize the hotels good and bad points is critical with smaller spaces, and this property does that with finesse. It is very close walking distance to Eiffel Tower & the Seine (hence the name).

Oh the Eiffel Tower is even more magnificent to see at Night! People drinking wine underneath the Eiffel and all kinds of people & activity around the area. I would HIGHLY recommend viewing at night if you get the opportunity, as well as in daytime, due to the wonderful Eiffel Tower light show. 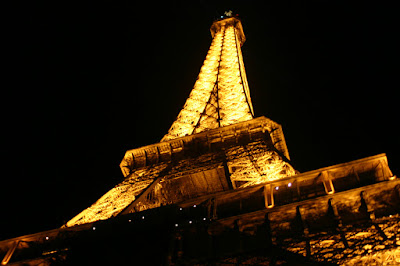 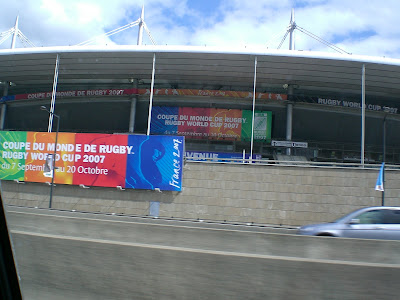 Tomorrow we will tour around Paris some, visiting the Louvre, Notre Dame Cathedral and other places. Vive la Paris!