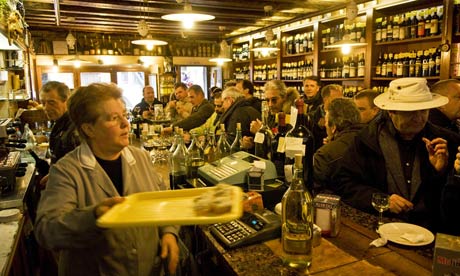 One going begging … nibbles in the atmospheric Cantinone-già Schiavi.
My trip to one of the world’s most romantic cities was inspired by the least romantic of situations: a boys’ night out in Soho, London, the kind that ends up in a random curry house before falling asleep on the night bus. On this night, however, we fell, quite by chance, into Polpo (see Jay Rayner’s review), a relatively new restaurant that appeared to be some kind of tapas bar, was lively and not too pricey – yes, this would do.

It was an inspired choice. It turns out we weren’t eating tapas (“We don’t use the T-word here,” said the waiter) but cichèti, small snacks unique to the bars of Venice. Our conversation, usually dominated by football, turned to the tenderness of sliced flank steak and the sweet softness of the sensational cuttlefish cooked in its own ink.

On more than 20 visits to Venice, Polpo owner Russell Norman has trawled the back-street bàcari, the small bars where locals pop in for a glass of wine and a snack, to find inspiration for Polpo. He is the right man to talk to about where to eat in what he calls “one of the world’s worst destinations for food lovers”.

“Avoid all the crappy tourist places,” is Norman’s advice, “anywhere with the menu in six languages stuck in the window or, worse still, one with photographs of lurid pizzas.

“But there is still a side of Venice which is alive and isn’t Disneyland, and it’s best typified by the bàcari.”

With those words ringing in my ears, and a list of his favourite bàcari in my pocket, I headed off for La Serenissima.

Cutting edge … La Cantina. Photograph: Gavin McOwan A bar crawl, or giro di òmbre, is the best way to try Venice’s bàcari, popping into each for a cichèti and accompanying òmbra (small glass of wine). And a good place to start was Ca’ d’Oro – Alla Vedova (Cannaregio 3912, Ramo Ca’ d’Oro), one of the best-known bàcari, on the Strada Nuova, well away from the city’s touristy hub. On a Friday night it was packed with punters lingering around the bar, waiting for the hot polpette (pork rissoles) to emerge from the kitchen. These delicious balls of salty, finely minced pork (the inspiration for the meatballs at Polpo) were snapped up within seconds of hitting the old marble bar counter, washed down by unbottled Veneto red in tiny glasses. Both cost €1 a pop.

Around the corner is La Cantina (Cannaregio 3689, Campo San Felice) which, like Polpo, has taken the simple cichèto to another level with its freshly prepared, imaginative dishes. On the bar was a tray of oysters on ice (€9 for six), which the barman shucked to order, behind it a counter of fresh fish and an ancient hand-operated slicer for the charcuterie, and on the blackboard around 30 wines available by the glass. But, like all bàcari, La Cantina didn’t run to anything as tourist-friendly as a menu. When I asked for one, the barman replied, “It’s me!”

Raw fish is a speciality, and my trio of minced salmon, lightly seared tuna with finely chopped cucumber and sea bass (€2 each) with tomatoes, prepared right in front of me, were melt-in-the-mouth fresh – the best thing I ate in Venice.

Market leader … All’Arco. Photograph: Andrea Matone/Alamy
Across the iconic Rialto bridge, on the other side of the Grand Canal and tucked down an alleyway, is tiny All’ Arco (Calle Arco, San Polo 436, lunchtime only). On a Saturday lunchtime this friendly bàcaro was heaving with shoppers from the nearby Rialto market, which sells a stunning selection of fresh fish and remains a favourite meeting place for Venetians. Plates of cichèti on the bar – langoustines, calamari, liver, speck and prawns, all served on slices of bread – were tasty enough, but what the owner Francesco Pinto was preparing behind it looked even more appetising. The hot sandwich of boiled beef sausages (which, he gesticulated, are made from the meat in the cow’s head) served with mustard was the perfect winter comfort food.

Around the corner is Do Mori (San Polo 429, Calle dei Do Mori), said to be the oldest bàcaro in Venice, dating back to 1462, with a dark wood interior and copper pots hanging from the ceiling. The house speciality is francobollo (literally “postage stamp”), a tiny white-bread sandwich filled with sliced meats, radicchio, gorgonzola or roasted vegetables. This Venetian institution is an obligatory stop on the giro di òmbre, yet the atmosphere is solemn, the staff seemingly forbidden to smile at customers. When I mentioned this attitude to a bunch of friendly Italians from out of town enjoying a lunchtime bar crawl, one of them said: “Don’t take it personally. When we order [in some bàcari] they reply in Venetian dialect, to remind us this is not Italy, we’re on the island of Venice.”

This fortress mentality is understandable given that these proud, mostly working-class establishments have made a conscious decision to reject the easy tourist dollar to continue serving a loyal but diminishing clientele. There are just 60,000 inhabitants left in the city, but it receives more than 16.5 million tourists a year.

Water to wine … Cantinone-già Schiavi.
Opposite Cantinone–già Schiavi (992 Ponte San Trovaso), located on a canal in Dorsoduro, is another symbol of disappearing Venice: one of the city’s last gondola workshops. Schiavi is really a wine shop that sells food on the side – although the cheese and fennel crostini were delicious. The walls are covered floor to ceiling by bottles, and there is a fantastic choice of 10 or so wines by the glass, mostly from the Veneto region, starting at €2. That, I noted, was the same price as the house, so I made a pest of myself and started to work through the labels (well, the glasses are tiny).

Venice is notorious for its lack of nightlife, but a good place to end a bar crawl is Campo Santa Margarita, the hangout for local and international students. Ai Do Draghi, at the north end of the square and known as the red house as much for its political leaning as for the colour of the facade, was swarming when I arrived. Like me, the cichèti were looking a little tired and dog-eared by late evening, so I ended the night with their excellent spritz, the classic Venetian cocktail (whose recipe Norman admits to nicking for Polpo).

Staggering back to my hotel I got lost for the umpteenth time. But then this, as much as the wine and the food, is the beauty of the bar crawl – it takes you through the medieval alleyways and floating magic of this amazing city.